Hot summers and cold winters are something many wish for – except when it comes to the indoor climate in the workplace. Human wellbeing and the ability to perform optimally are greatly affected by the indoor climate.

The Swedish Work Environment Authority recommends that the air temperature for sedentary work should be between 20–23°C in winter and 20–26°C in summer. For operational work, the temperature should not be less than 18°C and not exceed 24°C.

Temperatures outside the recommended range have an adverse effect on people. A high temperature, which is common in many workplaces during the summer, lowers performance, causes fatigue and contributes to concentration difficulties. High temperatures also exert a physical strain on the heart. Heavy work combined with high temperatures and a poor indoor climate can therefore constitute a harmful work situation.

In addition to keeping the right temperature, it is important to keep in mind that the air should be of good quality to maintain the highest possible level of performance. A good indoor climate should be a matter of course in all our schools, homes and workplaces. 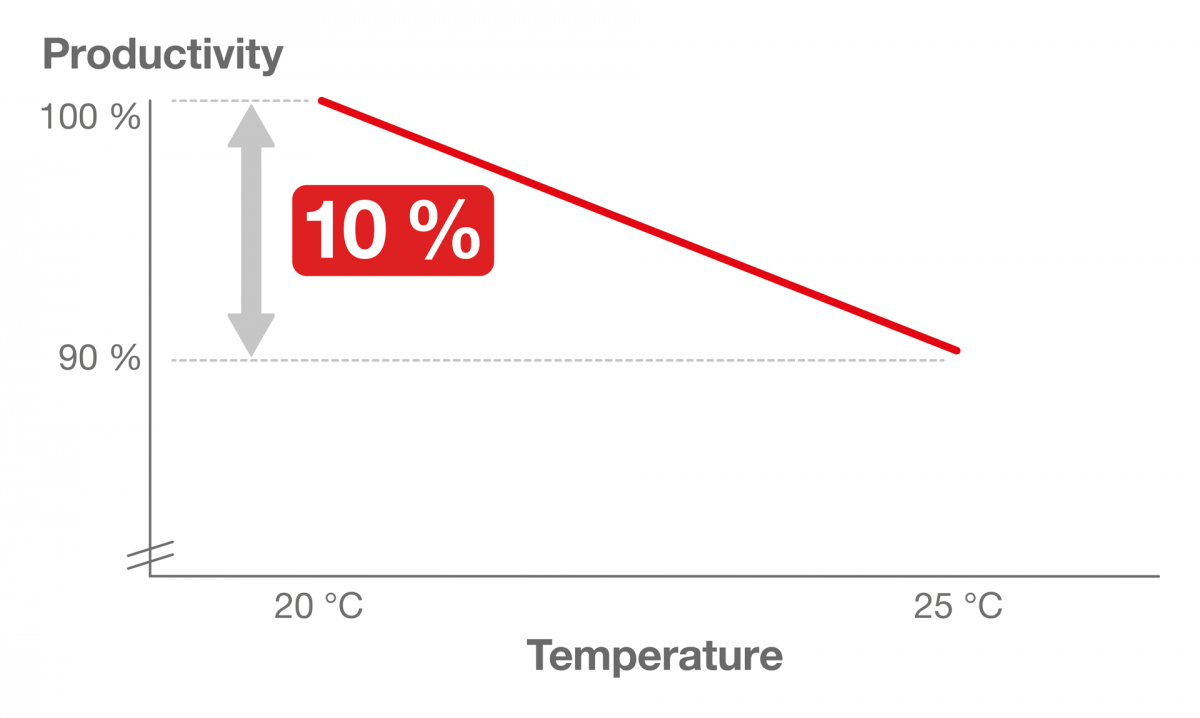 At a temperature of 25°C, the productivity of physical work decreases by 10 % or more.

Profitability is increased at industrial locations with optimized temperatures

Today, air conditioning in cars and other vehicles is commonplace and it is becoming more widespread in offices and shops, but it is still relatively unusual in an industrial context. Could it be, however, that this is exactly where the creation of a good indoor climate is most profitable?

A good indoor climate not only increases profitability but also creates wellbeing and makes for better health.

An example from an assembly industry where the ambient environment is cooled and heated using air shows that productivity decreases by at least 10% if the temperature is 25°C instead of 20°C.

How large is the additional cost of integrated cooling in new installations? The production room in the example comprises 12 000 sqm with an air flow of 28 m3/s. Four air handling units with the integrated cooling unit EcoCooler from IV Produkt entail an additional installation cost for the cooling units of approximately €150,000 and an operating cost of around €5,000⁠/⁠year.

If we examine the cost for the assembly industry of having an overly warm indoor climate without cooling for one month, it amounts to as much as €220,000 in increased payroll costs. The increased payroll cost is due to the overtime required to compensate for the loss of production in order to maintain delivery reliability.

The investment in cooled production premises pays off in less than a year, while people also feel better, according to the example.

Ventilation – a green and sustainable investment...

Many think that making sustainable choices has to be costly, but the fact is that ventilation is a green investm...

When LED lamps entered the market at €7 each, many people wondered why they should replace their incandescent ...

Innovative ventilation solutions can add value to your project. Here are three possibilities that you may not ha...

The thinking concerning the benefits that arise with good ventilation has changed over the years. Ventilation ha...

Enter your order no to find unique
documentation for your unit. Applies to units delivered from 2015 onwards.